Small but pretty fast – the Nikko Night Stalker was a personal favourite in 1989, and great value as well. It was pretty typical of the great quality R/C buggies (both hobby and toy grade) that Nikko were releasing in the late 1980s and early 1990s.

Nikko have made a lot of little buggies over the years. A lot. Probably more than any other brand. And they continue to this day as a company that has been around since the late 1960s, where many other toy R/C brands (even Taiyo, sadly) have disappeared.

Most readers probably won’t have even heard of the “Night Stalker” buggy, given that it is just one of dozens and dozens of little buggies released by Nikko over the years.

Example On This Page…
Learn About Models, Releases & Variants

Other Variants of this Release

But even if you’ve never heard of it, you might relate to it in the sense that just about everyone who enjoys R/C toys originally started out with some sort of small, simple off-road buggy and later graduated to bigger and more expensive things. For me, the Night Stalker is one of those “first” cars that I’m very sentimental about!

I got one for Christmas that year, when my older sister bought it from a nearby K-Mart store. I can still remember being in K-Mart and being lucky enough to be allowed to give this buggy a quick test drive.

At the time, I can clearly remember that Nikko had two buggies available – the Laser (which was 4WD) and the Night Stalker (2WD). The former was about AU$60 and the latter about AU$46 – prices which sound incredibly cheap today. But accounting for inflation, they would have been about the same as paying AU$86 and AU$113 in 2012 money.

Anyway, when I first gave the Night Stalker a test drive I remember being really impressed with it. I had already been to Tandy that year and had done a few test-drives of the R/C toys there, in a similar price range. And in terms of speed, the Night Stalker felt much quicker than those other cars. For $46 it was a pretty great toy.

Thanks to “Santa” (ie. my family) I was lucky enough to get both a Tandy 4×4 Off-Roader and a Nikko Night Stalker for Christmas that year, which was enormous fun.

Night Stalkers are pretty hard to find these days. But thankfully I have a great condition example in the original box, to showcase here…

That “Customers Please Note” sticker was just a K-Mart thing, not a Nikko thing.

The car came in two different colours – red or black, each a different frequency. My Night Stalker is the black version, but you can see the red version on the back of the box…

And here’s the car itself…

The sleek styling and low profile tyres were a product of the times – R/C buggies were becoming more and more aerodynamic and lower, in the late 80s.

Those yellow headlights with “Exciting” written on them came in a separate packet and you had to slot them into place. And the black aerial that you fed through a clear plastic tube – this was actually the first toy-grade R/C car I had seen with that type of (hobby-style) antenna.

I’m pretty sure the colour scheme was a case of Nikko once again copying something from the famous Tamiya Hornet. But the fact is, black + yellow/orange is a really effective colour combination, and this was a great looking car…

At the front the car has a large and very flexible bumper that protects it very well from impacts – and I say that as someone who drove this car to death when I was a kid. That bumper saved me from many collisions – with other cars, trees, walls… and it never snapped.

The yellow shocks also recall Tamiya’s CVA oil shocks from the 1980s, but they are just little springs in this instance. But they actually work perfectly well for this little car – with rigid axle suspension at the back, and independent suspension at the front. These days if you bought a budget priced toy R/C buggy it may not even have spring suspension.

And that’s the really great thing about the Nikko Night Stalker. Despite being only 26.5cm in length, there’s no shortage of power in High gear with this little buggy. In fact I can hardly ever remember using Low gear all that much. High was always good enough to get over rough terrain, plus offer exciting speeds on smooth surfaces. Especially when you applied the “Turbo” option on the forward/reverse lever.

So how fast does it go? Well, this is the first article I’ve written where I’ve actually done a series of speed tests for the car in question. And so far, the top speed I’ve been able to measure on the Night Stalker is… 14.4km/h

Which believe me, is quicker than you’d expect from a small buggy like this, from 1989.

Driving the Night Stalker is pretty entertaining, and the car is even quick enough to do a little skidding through corners.

I used to race my Night Stalker against several other 1980s R/C toys, on both smooth and rough surfaces, and it pretty much blew them all away at the time – including my Jeep Renegade and 4×4 Off-Roader. One day, a friend of mine came over with his Shinsei Sidewinder to race at my little dirt track, and the Night Stalker blew that away too. All this, while being a significantly cheaper R/C toy than any of those cars had been.

Getting it out again for this article really took me back to those days in the 80s – it’s funny how a particular toy can bring back so many great memories.

Another nice aspect was that the steering (which was direct – either full left or full right) worked internally via an electro-magnet and was functional even without applying the accelerator. A lot of 80s R/C toys tended to only steer whilst you were also moving forward or reverse.

In addition, I also never really felt as if the car understeered or oversteered – it always seem just about right to me, and great fun to swing around corners.

The manual was a single sheet, with instructions for how to play and also what not to do.

And the remote wasn’t just “Turbo”, it had a “Turbo Charger” function 🙂

One downside to this car was that the transmitter didn’t have terribly great range (about 7 metres), and when out of range the car would often start jittering and twitching as it reacted to other interference. Another downside to the Night Stalker is that being small and so low-profile in appearance left it with very little ground clearance. So even relatively small pebbles would end up rubbing the underside. It was best suited to smooth surfaces or smooth dirt terrain.

Overall though, this was such a great toy and I had enormous fun with it as a kid, usually running along behind it as it blasted along dusty trails.

And as I mentioned earlier, I may never meet another person who even owned this car. But I’m sure many of you can remember owning similar small buggies as your “first R/C buggy”, and taking them on adventures far larger (than the car) in your imagination.

This site uses Akismet to reduce spam. Learn how your comment data is processed.

I also had a similar Nikko with the same transmitter – with the Turbo mode; it was a white 4×4 I got for Christmas from Super K Mart (Chermside) when they did their 24 hour trade before Christmas. It must have been around 1988. I’d love to know what model it was! I can almost smell it!

Cheers for that 🙂
Hmm, a white Nikko 4WD buggy around 1988…It wasn’t the Nikko Laser, was it? As I’m pretty sure that came in white or black.
The Nikko Dictator was another white one, and 4×4, but that was 1/10 scale and top of the line (different transmitter).

Hi mate, it was probably more like the Tandy one with those distinct V-grooves tyres, and it was a truck. I remember the packaging and it was almost the same as the stuff on the current ones, ie black box and plastic. I’ll keep an eye out though! I also have massive nostalgic memories of my first RC car, which was a Tandy one, circa 1983; it was a yellow Ford (I think). It had a 9v in the controller that had a little knob for forward and reverse, and a little steering wheel as well. Wasn’t very fast but… Read more »

If you figure out what it was, be sure to come back and let us know. Vintage Nikko history is tough to pin down, as there were few (if any) product catalogues. The only way to find them now is ebay examples, or sheer memory…

As for Tandy on the other hand, well they always had catalogues. And I reckon your Ford might have been the Ford Mustangs sold at Tandy in 1983. As a thanks for visiting, I’ve just scanned them for you. Good memory!

Here’s mine and it works perfectly well: Cool to see, thanks for sharing!

In Spain, “Dominator” was called:

Raul, thank you for that info! I am going to update the article with your picture very soon, showing this additional release 🙂

i also have one but it says eagle on the stickers and i cant find anything about it.. The only thing i know is that its from 1984.. it is exactly the same as the night stalker only the decals say ‘off roud buggy’ and ‘eagle’ And yes they are original..
Do you know anything about different versions?Older or other releases? 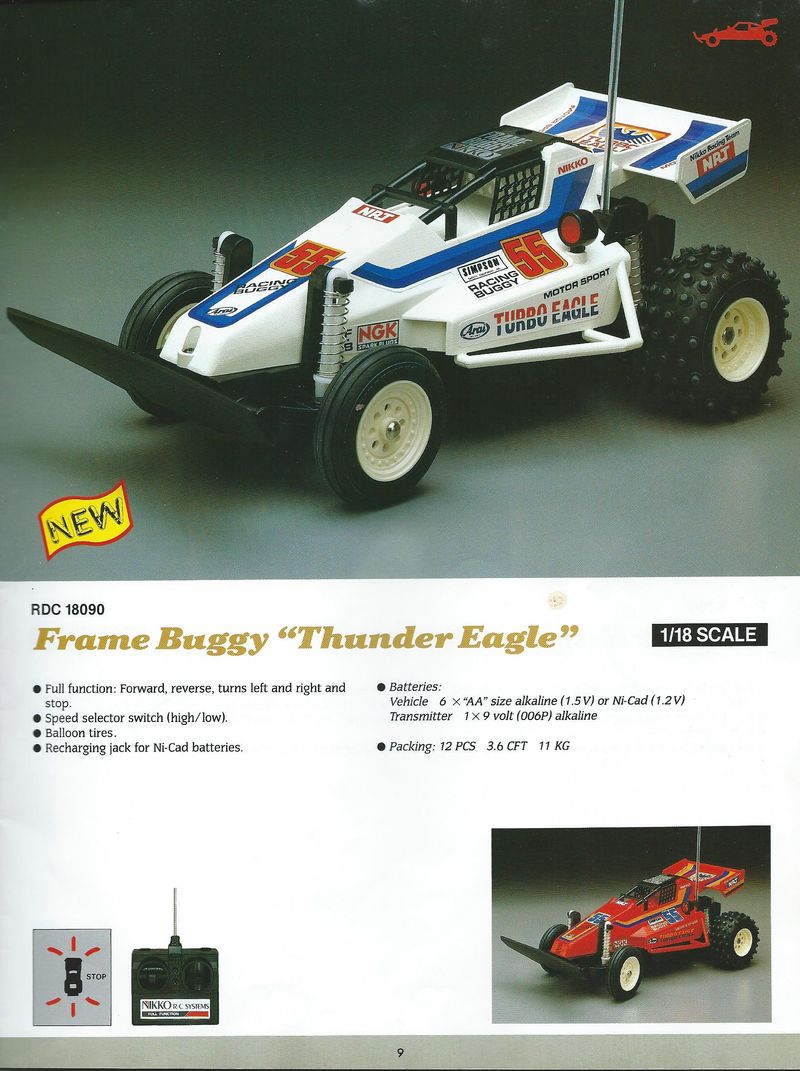 I said that is the same body/chassis as the night stalker but just with eagle stickers not turbo eagle..

Site Updates...by R/C Toy MemoriesAfter a hiatus of quite a few months, I am back to writing occasio … Read More1 month ago

Which vintage RC brands do you co …by BrankoFor me its Tamiya then Taiyo/metro. Read More1 month ago

Radio Shack transmitterby snappynutsThat's what I sort of thought..... thank you for the reply! Read More2 months ago

Which vintage RC brands do you co …by R/C Toy MemoriesSo with the forum re-enabled, after a hiatus... A simple questi … Read More2 months ago

R/C Toy Memories is a nostalgia blog run by a long-time collector. If you grew up with R/C cars sometime between the late 1970s and early 1990s, then you're sure to find something fun to read about here. I also write about other retro toys sometimes. Feel free to look around, participate in the forums, or leave a comment beneath any article if you have a memory to share.

A 1984 snow transport complete with gorgeous livery, a cargo trailer, and optional snow chains… It was enough to make a 10 year old boy faint.